FACEBOOK’S ‘SILICON VALLEY COIN’ IS A LEAP TOWARDS SURVEILLANCE CAPITALISM

The full list of partners working with Facebook to host its new crypto stablecoin has gone public – and already sparked fears of mass data collection.

Published by cryptocurrency news outlet The Block June 14, the partners for the project variously dubbed ‘Libra’ and ‘Facebook Coin’ make for revealing reading.

We know that Facebook is charging $10 million to run nodes for its cryptocurrency. Bitcoinist even uncovered a few who’d paid it. So I’m launching a revolutionary new ‘currency for the internet’. Who do I need to get on board?

Well I need some on-ramps, so payment providers like Visa and MasterCard. Why not throw in PayPal, Stripe and Pay U too? The more the merrier.

Clearly I also need some merchants and service providers to give users an outlet to spend their ‘internet money’. Well you can buy everything on eBay, and it certainly did wonders for PayPal. People spend money on Uber, although some insist on spending it with Lyft. And music streaming… so Spotify is a shoe-in. 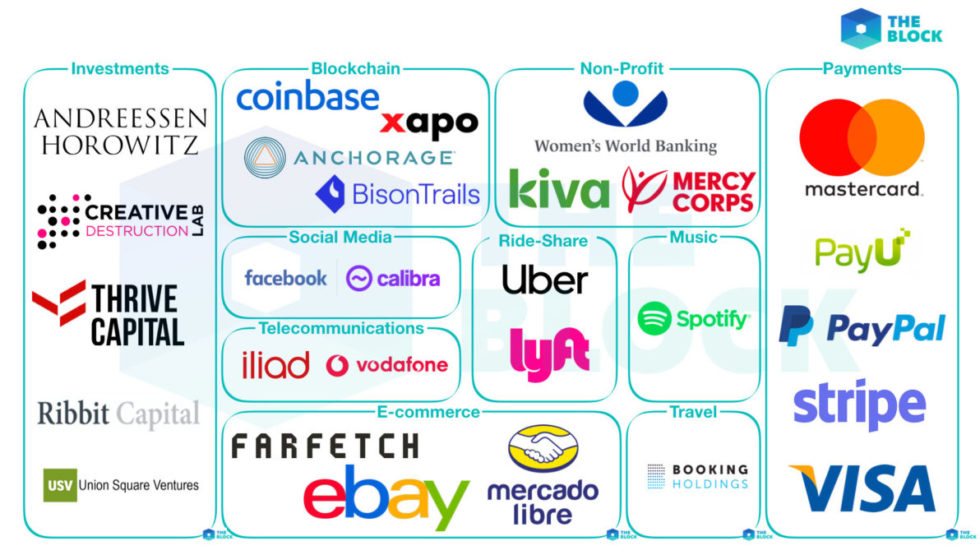 Add in a few Blockchain-related companies, so as not to alienate the crypto crowd, and a sprinkle of non-profits to make me look good, and we’re golden.

So yeah, for the launch of a payment ecosystem, Facebook has several boxes checked with its launch partners. But then we come back to the fact that these ‘partners’ have each paid $10 million for the pleasure.

Facebook has stated that it does not intend to control Libra (or GlobalCoin, FacebookCoin, or ZuckerBucks if you prefer?). Instead, after launch it will hand control to the ‘Libra Foundation’, essentially made up of all of these launch partners.

Facebook, Coinbase, Mastercard, Stripe, Paypal and other gatekeepers of the finance and tech establishment want to create a global currency so they can ban you from both spending and making money on the internet for WrongThink.

Uber certainly didn’t need to pay $10 million in order to accept the coin for ride-sharing services. Nor did Visa need to pay to become an on-ramp. A more likely scenario would see Facebook courting companies like these to attach themselves to the project.

So what are these companies paying for? (For now, we’ll assume that the non-profits didn’t pay, and are genuinely just token image-improvers.)

This is not a ‘brave new world’ of borderless convenient money, but a ‘Big Brother’ scenario. The current gatekeepers of finance and tech are moving to preserve the power that they see cryptocurrency eroding.

Uber could very easily start to accept Bitcoin $10622.4 -0.01% (or any other crypto) payments, without spending $10 million. Is Facebook suddenly interested in finance and cryptocurrency? Or is it still treading the only path it knows, the data industry.

As Coinshares’ Meltem Demirors points out, “this is less about payments and more about privacy and data gathering. SURVEILLANCE CAPITALISM Y’ALL.”

$10 million for access to all that lovely data starts to sound like a bit of a bargain. And with the proposed level of KYC, that really is going to be some useful information.

Why would Ebay, Uber, Lyft, Coinbase, Stripe, Visa and Mastercard care about governing the coin?

More than likely, that $10 million for a node is an investment to receive the transactional data going through said nodes.

It’s perhaps more surprising that Facebook didn’t manage to find the desired 100 partners (backing the coin to the tune of $1 billion) for launch.

Can’t wait for a cryptocurrency with the ethics of Uber, the censorship resistance of Paypal, and the centralization of Visa, all tied together under the proven privacy of Facebook.

Yeah, maybe I’d give that one a miss too.

Op Ed: With Bitcoin, Anarchy Is the Point, Not the Problem

Russian Central Bank Wants to Clamp Down on Cryptocurrencies